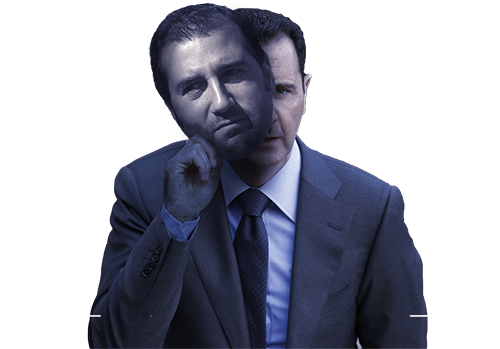 Rami Makhlouf Admits He Supported the Security and Military Services

The Syrian tycoon Rami Makhlouf has posted two video to his Facebook page.         In the first video he pleaded with Bashar al-Assad to lift “the injustice that has occurred,” while the second video published on May 3, 2020, carried a tone of defiance of Bashar and Asma al-Assad.

In the second tape, however, Makhlouf admits his direct support for the security services of the Syrian regime, with Rami Makhlouf considering himself, “the biggest supporter of these agencies and their biggest sponsor and servant.”

His words came against the backdrop of the security services arresting some of the directors of his various companies, as a result of his ongoing struggle with Asma al-Assad. He described the situation as, “difficult and dangerous, and if it continues as is, the country’s situation will be difficult, as there will be a dangerous turning point.”

Makhlouf continued to address the head of the regime, “Please do not believe these[people] , and do not permit the arrest of people who have served the army, security and the Syrian people with honesty and sincerity.”

This admission of supporting the security services, and thus being partnered with them in all the crimes committed by them, is a fully-fledged confession of the legal accountability of Rami Makhlouf, Bashar al-Assad and the other leaders of those agencies that have been immersed in the blood of the Syrian people for the past fifty years. In addition, Makhlouf has acknowledged that the money from Rami Makhlouf and the other commercial fronts, which Assad is using to escape European and American sanctions, belongs to the Syrian people, who today struggle to secure the basic necessities of life, as a result of Assad’s destructive policies. In the meantime, Assad is abusing the remaining resources in the country to continue his criminal war causing more death, destruction and displacement.

Rami Makhlouf’s videos carried several messages on several levels. In the videos, he begged at time and at other times made an explicit threat at another time and veiled threats at other times. His discourse was addressed to Bashar al-Assad at times and to the Alawite community at other times. The two videos showed the gravity of the situation between the two partners and close relatives: Rami Makhlouf and Bashar al-Assad. Makhlouf said that what is required of him is “to give up his companies and implement orders blind-folded,” which he rejects because he is not the owner of these companies but rather the “guardian”, as the owner is God. Makhlouf would not spell out the name of Asma al-Assad and her relatives. Instead, he would refer to her as “the others”, “people”, and “these individuals]”.

Rami Makhlouf also addressed his fellow Alawite – in a latent manner – that they might lose their income (the money spent on them). But he also tried to address all Syrians, through the way he filmed his video, the location, and the way he was sitting on the ground and behind him a pile of firewood intended for the burning. His message here was that was ready to burn everything and return to sitting on the ground, together with Assad and all the other teammates. And he is able to do that as he has already many good leverage inside the bureaucracy and the security sector, not to mention the tons of secrets that he possesses by virtue of his complex relations. He was surrounded with strong stalls, to indicate that he is supported by those to whom previously he had been good.

Makhlouf would not miss the opportunity to cite a verse from the Qur’an, to play on the religious string, while addressing a population which is generally religious. However, while citing the verse, he would forget the context of the entire verse, which gives exactly the opposite of what was alluding to.

Bashar al-Assad’s moves against Rami Makhlouf are unprecedented and it is possible that other steps will be taken against other businesspersons loyal to Assad. Choosing Rami Makhlouf is a message in itself that no one is immune. Only a week ago, no-one in Syria would have dared to criticize or negatively refer to Rami Makhlouf directly or indirectly. These steps indicate the depth of the financial crisis that the Assad regime is suffering from and reveals the pressure on his regime.

Today, a good number of Syrians who stood by the regime realize why corruption was one of the reasons why other Syrians revolted against the regime, and why they continue to this day despite the heinous crimes that Assad commits against them. These crimes are multi-faceted: bloody, economic, cultural, and social crimes. It is reasonable and logical therefore that accountability should not limited to those direct criminals from the military and militia sides, but should also be extended to those who contributed to the impoverishment of the Syrian people and the theft of their wealth over five decades. No one should buy in to the claim that the murderous criminal is less criminal than the thief.

Rami Makhlouf has just realized, and is reminding Bashar al-Assad that the security services infringe on freedoms and private property, and that Assad is the guardian of the constitution. It did not occur to Makhlouf however to remind Assad of this at some point over the past nine years, while Assad committed, together with his criminal gang, including Makhlouf, the most atrocious crimes against the Syrian people in violation of the very constitution he laid down in 2012, one line after another and one word after another.